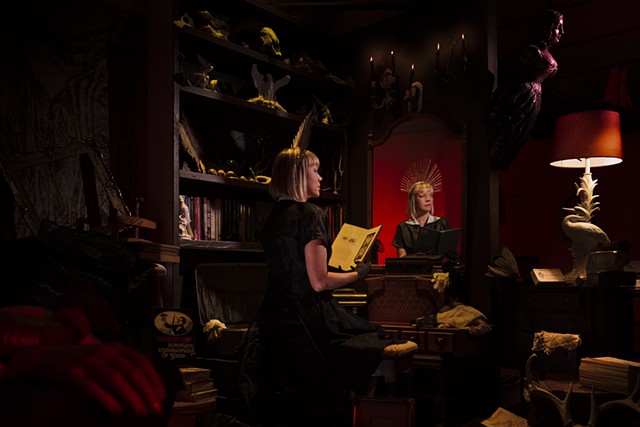 Artist in her studio at the Bakehouse Art Complex, Wynwood, Miami, 2019 Photo credit Pedro Wazzan “Years from now, when Florida's marshy Everglades are buried under liters of salt and sea, Christina Pettersson's work will be its haunting tombstone. Conflating Florida's sordid history with future visions of a paradise lost, her work embodies the mythical and outlandish character that has earned Florida its weird reputation. Lawless frontiers, ancient burial grounds, poisonous vermin, and ghostly figures appear in her work as both homage and warning. With her subject matter driven primarily by research, Pettersson works across mediums and often, site-specifically. A recent project at the Deering Estate, for example, incorporated both drawing and performance and considered the historic building's standing on an archaeological site. In her studio, a stately chandelier hangs above a sepia-toned wallpaper, imprinted with tropical flora; self-portraits are realized in cameos and feature the artist in late-19th-century garb. Memorializing the spirit of Florida, Pettersson's work isn't meant to be hopeful; it’s meant as a call to the dead.” – Nicole Martinez