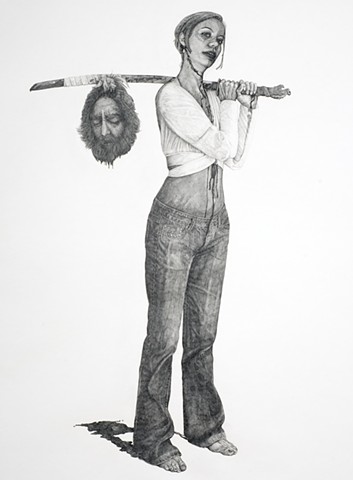 It has always been one of my favorite themes. Yet to speak the truth, I do not care in the least about the actual characters of Judith and Holofernes. I do not draw in order to make versions of exhausted themes. It is my own story, and the head I cut is history itself. The perfect murder. Sex and violence, naturally. The mood of exotic mystery still hangs in the air, a heavy breath lingering against the sword. Warm dark blood dripping down her belly. Marvel at the strange beauty of a severed head, contained within a drawing, and held up to the light like a glass of water. The narrative is long over. This is what I can do in a drawing, unencumbered by the perceived reality of time and place. This is drawing as potential memory, a way of summoning up an event before it has occurred, that more primal memory, spirit, breath force, nerve impulses, incantation; memory that breaks down barriers and imperiously remakes our settled way of seeing. The memory of no time. This violence would be gracious, clear and cool. Magnificent.