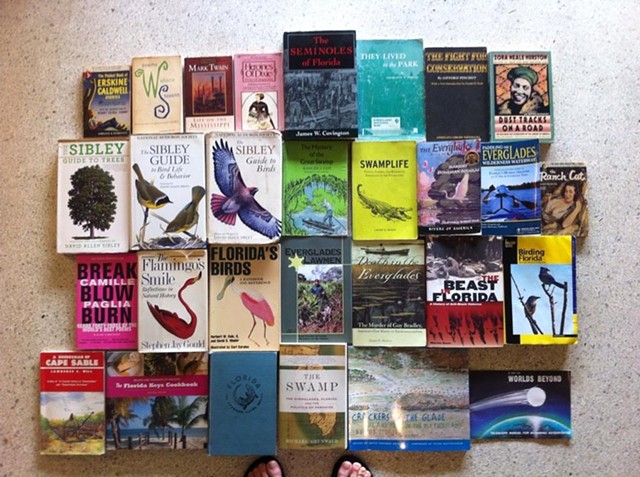 Day two. Corned beef hash, sweet potato and egg. Two gorgeous cups of coffee. The slow and deliberate gathering for my first bike ride on the Old Ingraham Highway. Scarcely a road now, it faintly sweeps thru a vast prairie, sawgrass and low water, coastal plain willow, a landscape of gentle browns and barely greens. Quiet for hours, except for the occasional mewling catbird or disturbed gator huffing away. Florida poison trees, Metopium toxiferum, frame the edges, eclipsing my desire to wander offstage.

Built in 1922, I later learn, the Ingraham Highway was the first road to the once town of Flamingo, accommodating Model Ts as well as horse and cart arrangements. It would have made me laugh had I known this fact. The beginning of civilization in the Glades. Now there’s only me, eating half a pastrami on rye in the shadow of a cypress dome.

Day six. There are two kinds of flatness I now realize: the bright infinity of the Everglades, and the other; death, suburbia. A Venetian painting and the one ironed out until all the color desiccates and dies, turned into vectors and grids. Lucid versus lurid, song versus bone.

Day eight. The female gators are the Lotharios of the Swamp, Ranger Kirk tells a crowd of subdued Asians along the Anhinga Trail. They do whatever necessary to reproduce. In point of fact, most all females are genetic strumpets, willing to trade a piece of this for a piece of that. Survival darling, the only conceivable basis of real whoredom.

Day eleven. A meteor shower last night tore at all the spectrum edges. A falling sky spitting out glitter because the owls commanded it.

Day eighteen. I listened to a podcast about whooping cranes. Another example of human endeavor to resuscitate something it long suffocated. “Million dollar birds” are given their very own Truman Show, as near to perfect a copy of everything- scientists even dress up as adult cranes and teach the fledglings to hunt, to eat, to fly, to mate. Extreme care at a huge expense, and it almost works, right down to laying the eggs. But the eggs are sterile.

One scientists even sobbed in the interview. “There's no explanation except it's all a mirage. A total fake.” The world's most expensive fertility experiment play.

Day nineteen. The Everglades is a slipshod version of that experiment, or worse. You are controlled and kept alive by breathing machines, but your noble band of scientists cannot hold off the hemorrhaging. You lie on a fractured limestone slab, deprived of your own elements, water and fire, while phosphorus and salt poison your blood. You are overrun by medieval predators.

This is the horseshit of an age of diminishing returns we live in. Goodbye panther, hello cockroach.

Day twenty nine. Yet inside it feels like anything but a morgue- darkly globs on a extraterrestrial landscape wrought with nothing so much as bird filled air. Colors like smeared marmalade and pink champagne behind a bazillion trees, hues flashing without names, a vision of light that predates war and Spanish galleons and plume hunters.

You can make planes disappear and the hunter feel hunted. You are one of the last things I love without conditions, and the only place I feel truly wild.