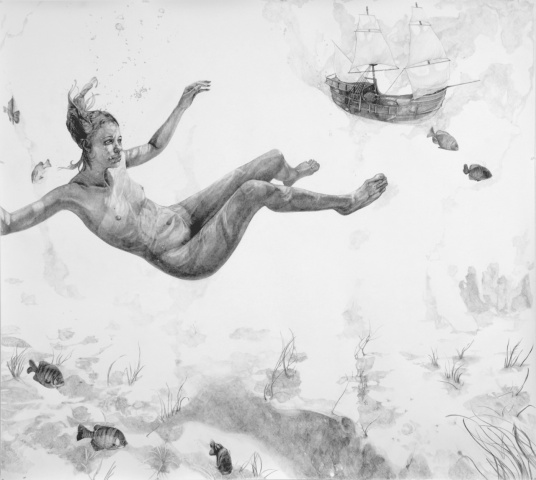 Ophelia at fourteen
graphite on paper
72"x80"
< previous next >

Why is it so dark, she asked. In the beginning, he responded, it is always dark.

But that was not true.

Once, in a play, there lived a girl named Ophelia, a girl-child really, and in the beginning she was light.

No, I should have phrased it:

Once, in a play, there died a girl named Ophelia, a girl-child really, but in the beginning she was light.

She used to laze for hours in the river, and only her face and hands, floating, left the sky feeling bashful.

She loved to play with Hamlet's toy boats.

Never did Ophelia know such exuberance as when the sails of ships were sunk below the surface of the river, and persisted yet in sailing the undercurrent with the fishes.

How glorious they were. An object in motion, how it does go on.

A tragedy cannot stop it.

Notice how Ophelia's hair waves like meadowgrass under floodwater, long before the accident, and her pale palms retain their sweet stretch toward the sky.

(People are always babbling about before, but in the end they only remember the end, a drowning to end all drownings.)

Only those who recognize her from before, of which, admittedly, there are very few, and long gone, will declare that shame did not envelop her before the event, that, in fact, clothes would not have occurred to Ophelia in the river, which had clothed her so well for years before.

See what a useless trick one story is. One play to rule them all. Or it is something worse, tearing at the brightest reed in the river until all the life has dropped out of it, and then having the gall to place her back in the very water she loved for the poor sky to see, unable to stop it, and the horrified river, who could not even weep for her.

For shame Shakespeare. Better to have put a slit in her throat like an extra mouth, or dropped her down a rabbit hole.

We are accustomed to your cruel pen, the way it marks a creature for death, death only, and evermore, but this is too much.

I refuse. I am taking it back,

taking it all back.

The soft river, the lazing reeds, the warm body budding with life and blood, below a most grateful sky.

I am taking it all back from you Shakespeare, and never again will you fondle her, or hold her bright wings cupped in your palm.

See how she turns away! The ship is returning to guide her gaze.

So much the better to be remembered thus, and thus to be forgotten. Would that I could be forgotten so, floating in the river.

Now, Shakespeare, make a note. This marks the beginning of the inventory of your goodbyes. Watch as I take them all away from you.